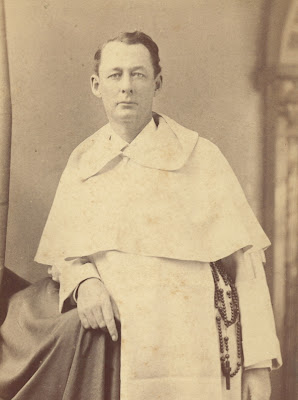 Fr. V. F. O’Daniel, O.P. provides the following biographical sketch of Fr. John Antoninus Rochford, O.P. (1834-1896), preacher and Prior Provincial (1873-1877) of the Province of Saint Joseph, considered by the Dominican Sisters of Sparkill to be a co-founder of their community due to his active encouragement of their foundation (1876). Fr. Coffey’s Pictorial History of the Dominican Province of St. Joseph (1946) describes Father Rochford as “A star in St. Dominic’s American crown of glory.”
From Victor Francis O’Daniel, O.P., The Dominican Province of Saint Joseph. Historico-Biographical Studies (New York: Holy Name Society, 1942):  “Father John Antoninus Rochford was born in Alexandria, Virginia, January 27, 1834, and was one of the large family of Bartholomew and Jane (Carne) Rochford. He began his education in his home town, and was sent to Georgetown College (now University) when about twelve years of age. From there he went to Saint Joseph’s College, Perry County, Ohio. While at this latter institution he entered the Order in the adjacent priory of the same name, where he made his religious profession on December 3, 1854. As was then the usual routine, he helped with the teaching in the college and at the same time prosecuted his own ecclesiastical studies. Through industry combined with a very bright mind he acquitted himself with great credit both as student and professor. Bishop James Whelan, coadjutor to Nashville, ordained him at Saint Joseph’s on July 10, 1859. Shortly after ordination the promising young priest was sent to the college at Sinsinawa, Wisconsin. There he taught, amongst other things, music and English literature. But in 1860, Father Michael D. Lilly having resigned his position as president of Saint Joseph’s College, in Ohio, Father Rochford was brought back there to take his place. However, as has been seen, this educational institution was suspended the next year supposedly for the duration of the Civil War.
Father Rochford was then assigned to Saint Peter’s London, Ontario, Canada, which had just been taken over by the province. Here he remained until 1864, towards the end being superior of the house and vicar general of the Diocese of Sandwich. (This diocese was first called the Diocese of London, then changed to the Diocese of Sandwich, when Bishop Peter A. Pinsonneault had Sandwich made the episcopal seat. Later the Diocese of London was restored under Bishop John Walsh.) Then he appears to have spent his time between Saint Joseph’s and Zanesville, Ohio, until late in 1861, when he was sent to Saint Peter’s, Memphis, Tennessee. In 1868 he became pastor of Holy Trinity, Somerset, Ohio.

But before the close of 1869, we find him associated with Bishop Sylvester H. Rosecrans, and residing with him in Columbus. The bishop obtained this permission from Rome that the talented and exemplary Friar Preacher might aid him with the ministry in the episcopal city and with the teaching in Saint Aloysius’ College and Seminary. The two lived at Saint Patrick’s, now a house of the province. Though it is not so recorded in the Catholic Directory, Father Rochford is said to have been also a vicar general at this time. Late in 1872 or early in 1873, as the bishop no longer needed his services so badly, the Dominican was assigned to Saint Vincent Ferrer’s, New York City, whence he gave much of his time to the missions. There he was, the reader will recall, when the chapter of 1873 elected him provincial.

During his four years of office he made Saint Vincent Ferrer’s his home. In 1878 he was appointed pastor and superior at Saint Dominic’s, Washington, D. C. There he built the present priory standing between the church and the school. He remained in Washington for three years after ceasing to be superior. In 1884 he was elected prior of Saint Louis Bertrand’s, Louisville, Kentucky, and in 1887 became pastor and superior at Saint Antoninus’, Newark, New Jersey. From 1890 to 1892 he resided at Saint Mary’s, New Haven, Connecticut. Thence until the end Saint Vincent Ferrer’s, New York City, was his home. His health had been declining for a number of years. He died, of general debility and hardening of the arteries, in Saint Vincent’s Hospital, New York City, October 5, 1896, and was buried in the Dominican plot in Calvary Cemetery Long Island City, New York. As was but natural, the demise of so good and so great a man caused profound grief both in the Order and among-his wide circle of friends and admirers.

For many years Father Rochford had been one of the outstanding priests of the country as well as among his confrères. He was a splendid physical specimen of manhood, tall, erect, and agile–ever active and zealous in the cause of religion. He was an excellent theologian and English scholar, a fair poet, and one of our foremost pulpit orators. Nothing daunted him when there was question of saving souls. Our readers will recall how he went through the epidemic of yellow fever that visited Memphis in 1867. The documents in the archives of the Dominican Master General, Rome, show that he was considered for a miter more than once. Well might it have been so, for he was eminently fitted for the position. In whatever charge that was entrusted to him he acquitted himself admirably. He had rare and varied ability. His sermons and lectures, which he delivered in many places, were said to have been gems in thought, order, expression, and delivery. Those who lived under him ever extolled him as an ideal superior–kindly, gentle, considerate, exemplary. One need not say more.”